Now in the midst of the 2020 primaries, its interesting to also look back and reflect about how the primaries unfolded four years ago. 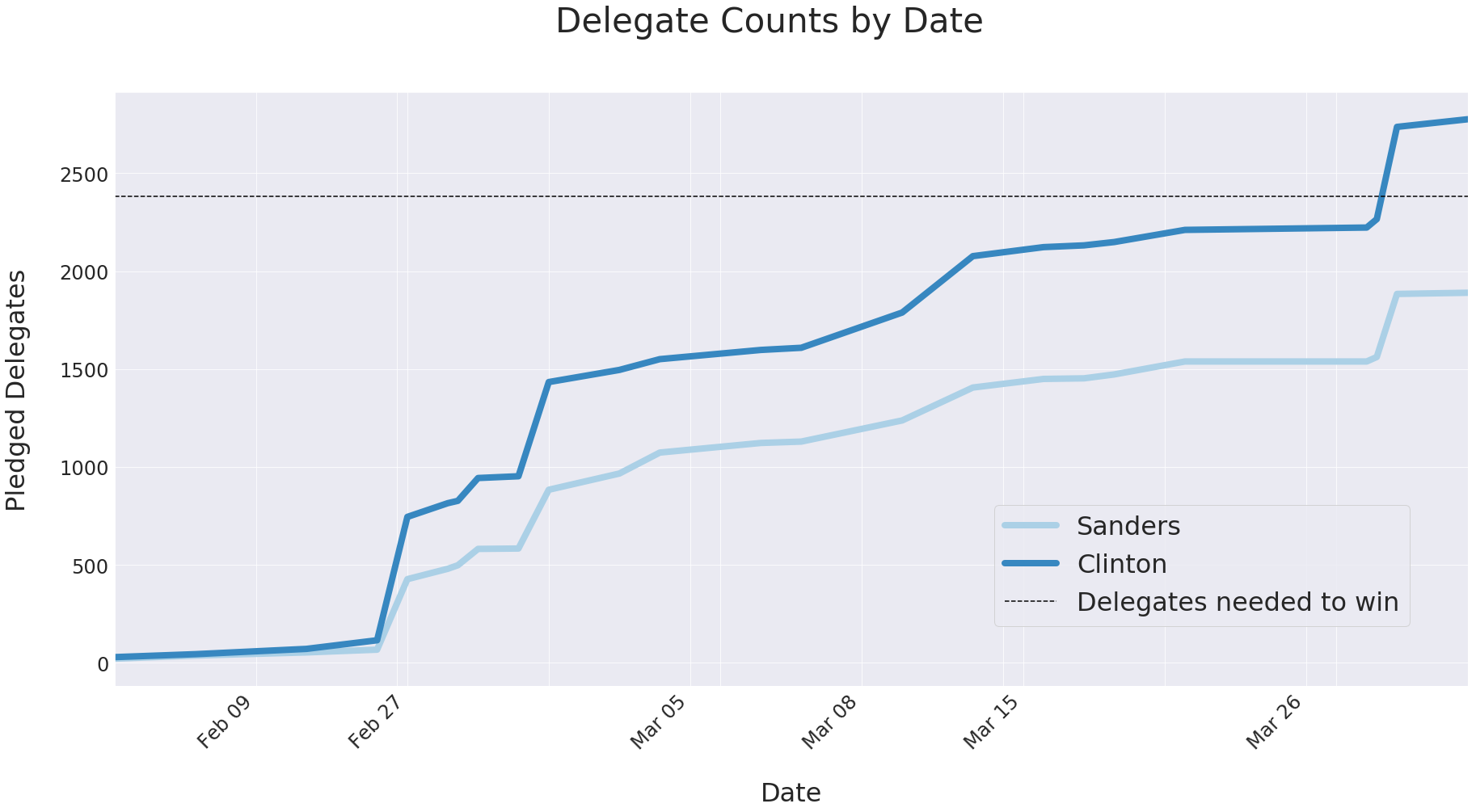 Scroll on below to see a more detailed breakdown of how the 2016 primary unraveled.

The primary race started off with a heated battle in the Iowa caucuses. Clinton garnered 49.8% of the vote, and Sanders 49.6%. Despite the tiny margin in popular vote, Clinton was awarded 29 delegates, while Sanders only took home 21 delegates.

New Hampshire was a landslide! Sanders took nearly two thirds the vote with a whopping 60.1%! Despite this, with the help of superdelegates, Clinton still managed to get 15 delegates, shortly behind Sanders' 16. The lead narrowed, and it was a tight race.

Clinton took Nevada with 52.6% versus Bernie's 47.3%. That alone gave Clinton an extra 20 delegates and Sanders 15. Clinton again capitalized on superdelegates, garnering 7 while Sanders only managed 1. Clinton's lead became a little more comfortable, extending from 7 to 18.

Wow!South Carolina was a blowout. While New Hampshire was a triumphant win for Sanders supporters, South Carolina was an even bigger devastation. Clinton dominated taking nearly three quarters of the vote: 272,379 votes (73.4%) vs Sander's 96,498 votes (26.0%). Clinton took a total of 44 delegates, and Sanders only 14.

Super Tuesday solidified Clinton's lead. Clinton took in 622 additional delegates, Sanders only 357. Sanders did win Colorado, Oklahoma (!), Minnesota, and his home state of Vermont, but took major losses in Texas, Virginia and across much of the South (Georgia, Arkansas, Alabama, and Tennessee)

Sanders won another solidly with 64.3% of the vote. (Clinton got only 35.5%) Despite this, Clinton got 4 of 5 of the superdelegate pledges. In the end, Clinton's lead was only cut by 6.

Bernie was popular with Democrats Abroad! He took in 68.9% of their votes. He wasn't so popular in Mississippi. Clinton got 82.5% of the popular vote there, Sanders only 16.6%. Michigan was neck in neck In sum, Clinton took 116.5 delegates and Sanders 83.5. Yes, fractional delegates were introduced here, as superdelegates from democrats abroad receive half a vote. You thought we had declared 3/5 votes unconstitutional, but then again, what's the deal with superdelegates in the first place? Or how about our very own Puerto Rico?

While not depicted here, the Northern Marianas supported Clinton with 54% of the vote and awarded her 9 delegates. Sanders got 2.

March 15th was a real blow for Sanders just as South Carolina and Super Tuesday were weeks before. He lost every state. Clinton pulled in another 481 delegates, Bernie 300.

March 26th was another win for the Sanders campaign, taking all three contests capturing 70 to 80% of each states popular vote! (69.8%, 79.3%, and 79.6%)
Even so, superdelegates continued to ignore their constituents preferences. Of the 30 superdelegates between the three states, 17 endorsed Clinton, while only 3 endorsed Sanders (another 10 postponed their vote, choosing the wait for the DNC convention). In total, Sanders cut Clinton's lead by 30.

Sanders won both Wisconsin and Wyoming by modest margins (56.6% and 55.7%) but still came up short in delegates due to more unfavorable superdelegates. Clinton got 58 delegates, Sanders 56. If Clinton's lead wasn't already demoralizing, watching her garner more delegates by losing the popular vote in 2 more states was.

The primaries circled back around to the east coast and Clinton's home state. She took 57.5% of the popular vote and 180 delegates. Sanders got 108 delegates. Notably, Sanders won almost every upstate county in New York, despite Clinton winning New York City and Long Island.

Clinton won Conneticut, Delaware, Pennsylvania and Maryland with popular support ranging from 52 to 63 percent. She won another 28 delegates while Sanders won 168.

Sanders won the popular vote 52.5% to 47.5% but only got 44 delegates while Clinton got 46, once again due to superdelegates.

May 17th: Kentucky and Oregon

Clinton finalized her contentious victory with wins in California, New Jersey, South Dakota and New Mexico. Superdelegates also continued to show their colors, with 106 endorsing Clinton and only 4 Sanders.

Clinton had already effectively won the nomination, and finished the race with a big win in the capital with 78% of the popular vote.

I created this infographic using data from the Wikipedia . I processed the data and reformated it using Python and Pandas. From there, I then created this map using d3 and javascript.